Are you looking for a good fly fishing movie to start the weekend off with a bang? Fly fishing movies are timeless and provide you with comedic relief, deliver instructional information on how to improve your skills, and shed light on environmental happenings. By selecting one of these 10 featured films, you can experience all kinds of fun species and beautiful areas of the world right from your living room.

There are a variety of fun fly fishing movies, documentaries, and autobiographies that make our list. Whether you want to learn about the dangers of the salmon population or learn how to fly fish from Ian Gordon, there is a film for you to enjoy.

Providence is the 5th movie in Confluence Film’s compelling collection. It is an engaging film for fly fishing fans because it takes place in a special location and features various fish species.

This saltwater fly fishing expedition takes place at the famous Providence Atoll, located in Seychelles. Somalian pirates threatened these waters for many years, so the area was clear and ripe for fishing when the team arrived in 2015.

In this film, you witness the fishermen experience many species, including Bonefish, Milkfish, Giant Trevally, Trigger Fish, Bluefin Trevally, Bumphead Parrotfish, and much more.

Back Country New Zealand is a passionate film series that hits home for many of the native Kiwis. It covers “Going bush,” a classic national pastime for people in the country as they fly fish throughout the mountain streams. You see the passion in the people’s eyes as they catch giant trout in some of the most beautiful landscapes in the country.

The two films in the Back Country New Zealand series take a close look at the diverse fisheries in the spacious areas of the country, including the anglers who hold a special bond with the wild. Movie viewers will be enthralled by the luscious landscapes examined throughout the film.

3. Bluefin Tuna on the Fly

Bluefin Tuna on the Fly captures a worldwide adventure of people chasing fish and exploring the great outdoors. You see many fly fishing techniques and passions come together in the compelling film.

Bluefin Tuna were long absent off Pays Basque’s coast in France. This film captures what life is like when the fish return to the familiar waters. The fly fishermen who catch these fish on the fly provide a fascinating film that makes you wish you were there off the coast of France.

4. Only the River Knows

This fly fishing film delivers a glimpse into the eyes of obsessive anglers, challenging the difference between fact and fiction. You follow the story of young Rolf Nylinder, who finds himself lost in the backcountry of New Zealand.

Through this expedition, he stumbles upon the personal journal of Lars Lenth, a legendary native fly fisher. Lars Lenth invested 3 months into exploring the famous river and huntings its huge trout. During the night time, Lenth would settle down in a cabin and write out his fishing experiences.

Rolf seeks to live out the stories told in the journal, and he travels along the Lethe River hunting the same trout that Lenth did 25 years ago. The journal discovers the true soul and history of fly fishing in the area. The film keeps you wondering if Rolf will catch the big fish and finally meet the journal’s author.

The film received awards at the 2013 Drake Awards for “Best Story” and “Best Movie.” The movie offers one of the more intriguing storylines on the list and will keep you on the edge of your seat.

5. Where the Yellowstone Goes

Where the Yellowstone Goes captures a one-month journey down one of the longest rivers in the United States. When you watch this movie, you feel as if you are on the trip with the crew. Throughout the film, you learn about the diverse lifestyles of locals alongside the Yellowstone River. The colorful cast members continuously share some of their most interesting life stories.

The movie also covers the controversies and history surrounding this body of water, which leads to interesting foreshadowing and questions about what the future holds. Fly fishing fans will feel truly connected with the fireside chats, unique characters, and interesting fish in the emotional river expedition.

6. CHALK: The Bedrock of Fly Fishing

In this feature-length film, you explore England’s chalk streams like Broadlands, The Itchen, The Test, Sawyer, Halford, and Skues. All these watersheds helped transform the sport of fly fishing in the country. Throughout the movie, you meet the streams’ legendary personalities, their compelling stories, and many of the timeless fly fishing techniques.

CHALK goes a step further when it highlights the geology that gave birth to the most monumental rivers and their unique wildlife. While the film celebrates the amazing history of the chalk streams, it also sheds light on some of the challenges and threats these environments face.

The narration and voice overs include some of the fly fishing world’s most iconic personalities, like Steve Cullen, Marina Gibson, Alex Jardine, Charles Rangely Wilson, and Glen Pointon. This film is a passionate fly fisherman’s dream.

Former Spey Caster world champion and highly skilled salmon fisherman Ian Gordon delivers an exciting view into how he mastered his craft. Gordon is regarded as one of the best salmon fishing coaches globally, and he shares every detail for fly fishing in Scotland.

His instruction includes single and double Spey Casting instruction, watercraft, fly tying, and overall history. Not only will you learn interesting insight from Ian, but you get to experience some of the most renowned rivers in Scotland, including the Findhorn, Dee, and the Spey. For fly fishermen looking for a comprehensive, detailed rundown of the salmon process, this is the perfect film for you.

This Ian Gordon film does not only teach you the fundamentals of fly fishing, but it also gives you a unique perspective of Scotland’s salmon fishing history, culture, and key characters. Gordon also hosts many vacations and fishing holidays for weeks at a time. You get the treat of seeing some of the most beautiful areas of Scotland.

Tributaries will stretch your mind and broaden your horizons. It is a film that highlights the connection between people, cultures, and water. The film features three guides: a Patagonian trout fly fisherman, a Viking Icelander, and a Bahamian fly fisherman personality.

This film is interesting because you learn about the unique differences and journeys of these men. But the fly fisherman community holds much more commonality than you think.

Atlantic Salmon: Lost at Sea is a fascinating documentary that required 6 years of production. It covers the investigation and lifespan of juvenile salmon when they depart from the rivers toward the sea. It describes the scary and unfortunate reality for the declining salmon populations.

The film explains how shooting salmon on land and in the sea will cause sharp decreases in the Atlantic Salmon population. It also offers possible solutions on how we can preserve the population going forward. For fly fishermen who are severely concerned about the future of salmon, this is a must-watch film.

Rise, which follows the film Drift, takes you on a wild adventure to six picturesque fly fishing areas. The film begins in Florida for prime tarpon fly fishing, and then it transitions to Patagonia for the best brown and rainbow trout in the world.

When the team arrives in the United States, you understand how Hurricane Katrina affected the redfish fishery in Louisiana. Rise also captures Henry’s Fork, located on the snake river, which delivers some of the country’s best dry fly fishing experiences. The movie ends with trips to Venezuela and then Alaska, where the first fly fishing lodge was established.

A Few Other Classics Worth Mentioning

While not all fly fishing movies can make the list, we had to leave room for the honorable mention films:

We also have a list of some other related articles on movies that you will enjoy watching:

No matter what type of film you search for, there is an entertaining film to satisfy your fly fishing itch. Through each of these movies, you can experience the most beautiful fish species and locations in the world. Some of these movies will keep you on the edge of your seat with compelling plots. If you want to become educated on the dangerous effects of commercial fishing, there is always an opportunity to learn.

10 Bass Fishing Movies to Pull on all Your Strings 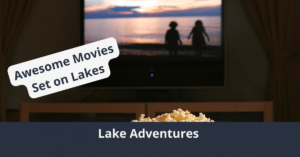