As of right now, we know of roughly 2,000 creatures in the oceans and seas that are poisonous or venomous to people. Some of this sea life stays near the ocean floor but can still be a threat if stepped on or even touched.

While some of these oceanic dangers can cause minor stings or small bites, many are potentially lethal.
(You might be interested in reading about the Marine Animals with the Strongest Bites)

With a growing human population, and more people snorkeling or SCUBA diving each year, injuries from dangerous sea life continue to rise. That’s why we rounded up ten of the most dangerous fish in the ocean and seas (in no particular order).
(Are you interested in reading about the Most Dangerous Freshwater Fish?)

Top 10 Most Dangerous Fish in the Ocean

While the textile cone snail is not technically a fish, it is worth making this list because it’s among the most venomous creatures in the ocean. This snail lives in coastal waters off of Australia, Hawaii, French Polynesia, Eastern Africa, the Red Sea, and the Indo-Pacific region.

A single textile cone snail contains enough venom to be lethal to 20 adults! Worse yet, there is no anti-venom for their sting, and it can kill a person within a few minutes.

A snail might not initially sound like a threat because of its slow speed. However, most human deaths from the textile cone snail occur from people picking them up on the shore or accidentally standing on them in the water.

The moray eel may not be venomous, but they have powerful jaws with sharp teeth. Around 80 species of moray eels exist, and they are found in shallow waters with reefs and rocks where they can hide.

Moray eels are in both tropical and subtropical waters, and if they feel vulnerable, they can attack humans with a powerful bite. Moray eels have taken off fingers when attacking humans, so keep your distance if you spot one.

The pufferfish might look cute as it swims around unthreatened, but it can be seriously deadly. When pufferfish feel a threat nearby, they take in enough seawater to puff themselves up into a spiky ball.

The more dangerous part of a puffer, also known as the blowfish, is the toxin in its body. This toxin, called Tetrodotoxin, can kill up to 30 adults. Even worse, there is no current antidote. If you encounter a pufferfish in the ocean, steer clear.

In Japan, meat from the blowfish is thought of as a delicacy but requires intense training to serve the correct part without killing those dining on it. Every year, several people die from eating pufferfish, so this is a risk we certainly don’t advise taking.

The Atlantic torpedo ray lives along the coast of North American, South Africa, and the United Kingdom. These rays don’t typically attack people without being provoked but hide under the sand during the day, which makes them a risk to step on. At night they come out to feed.

While they camouflage themselves in the sand during the day, they can wrap their “wings” around their prey, or a human arm or leg, and attack at night.

If an Atlantic torpedo ray feels threatened, it can produce enough of an electric shock to stun a human—up to 220 volts. Even if the shock itself does not kill a person, it can result in drowning.

Stingrays don’t typically attack humans, but they have killed before when they feel threatened—whether they are in danger or not. Steve Irwin, the famous Australian wildlife conservationist known as the Crocodile Hunter, died from a stingray barb to the chest.

Stingrays have enough venom in the barbs (that look a bit like a thin tail) to kill an adult human. The sting isn’t the only thing that can be lethal, though. The pointed end can puncture the lungs and other organs. Even when a stingray is dead, the sharp barbs can still injure a person.

For many of the same reasons that great whites are dangerous, so are tiger sharks. The tiger shark often hunts in shallow waters where humans swim, and they are prevalent in tropical waters and popular tourist locations, like Hawaii.

In terms of recorded attacks, the tiger shark comes in second to the great white. Combine that place in shark attacks with their predatory behavior, attacking without being provoked, and continued hunting after the first bite. That’s why we consider the tiger shark among the most dangerous fish in the ocean.

While sharks often get the primary reputation for deadly creatures in the sea, they aren’t always the most lethal. However, they are fearsome enough that they still make the list of the most dangerous fish in the ocean.

One of the primary reasons they are so dangerous is that they actively hunt for prey and can mistake humans as such, whereas other lethal fish might only sting with venom if touched.

Great white sharks have roughly 300 sharp teeth in multiple rows and can get as large as 20 feet in length. Great whites can swim up to 25 miles per hour, and they live in coastal areas all over the world—essentially any oceans or seas with water temperatures between 54 and 75 °F.

The great white is abundant off California, the eastern Atlantic shore board of the United States, throughout Oceania, Japan, western South America, the Mediterranean, and South Africa.

The Red Lionfish is part of the Scorpaenidae (also known as Scorpionfish) family and has venomous spiny protrusions on its dorsal fins.

Red Lionfish are intriguing to look at, and many fancy aquariums house these fish. The lionfish’s zebra-like stripes and elongated spines in both their dorsal and pectoral fins make a fascinating display.

However, the venom in the spikes of the lionfish can cause extreme pain, nausea, fever, and blisters.

What’s also concerning is that the lionfish seems to be spreading to new areas of the ocean. These fish previously were found in the Indo-Pacific region of the world. The species can now be found in the Caribbean and off the coast of both North and South America.

The stonefish is the Synanceia verrucosa genus among the Synanceiidae family. Not only is the stonefish incredibly venomous, but it is also one of the most camouflaged fish in coral reef areas.

Stonefish do not go out of their way to attack humans, but even experienced SCUBA divers can find it challenging to spot them.

The stonefish moniker comes from the fact that they look like a stone on the ocean floor, staying still from hours at a time, and can even have algae accumulate on their body.

If you step on a stonefish or accidentally get poked by one of the spikes on their dorsal fin, the venom is intensely painful and can kill an adult human in less than one hour. Stonefish are especially prevalent along coastlines in the Indo-Pacific region and Australia, in tropical coral reefs.

The box jellyfish isn’t just one of the most dangerous fish in the ocean; experts consider it to be one of the deadliest creatures in the world. Since 1954, at least 5,568 people have died from box jellyfish stings.

Australia and Southeast Asia have some consistent numbers of yearly deaths since this is a region the Chironex fleckeri species inhabits.

While box jellyfish may not move at the speed a shark can travel, they can still propel themselves at the rate of a human swimmer. What makes them even more threatening is that they are nearly transparent. Even in clear water, you may not see one until one is almost on top of you.

The tentacles of the box jellyfish can grow up to 10 feet long—yes, taller than some walls in most people’s houses. On those tentacles are roughly half a million venomous harpoon-like nematocysts that can pierce human skin.

A box jellyfish has enough venom in those nematocysts to kill an estimated 60 adults. Even those who survive can suffer from intense “hot iron” like pain for weeks. The pain alone has the potential to cause shock and sometimes drowning.

A Handful of Extremely Dangerous Honorable Mentions in the Ocean

Everything in life has some risk, and swimming in the ocean is no different. We don’t intend to scare people out of the water entirely, but it’s smart to know your surroundings and understand what to keep your distance from in the ocean.

For example, sharks tend to feed most often around dawn and dusk. So, if you’re near the shore but the sun is setting or just coming up, you’re putting yourself at more risk for attack. Coral reefs are also beautiful to snorkel around, but many of the sea’s predators and venomous creatures hang out in these places.

Keep a safe distance from sea life, don’t flail around (which makes you appear like a wounded animal to sharks), and don’t touch anything unless you’re 100 percent sure of what it is.

The underwater world can be admired without disturbing it and without being touched. Remember, even the most innocent-looking fish could be deadly. 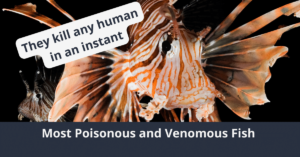 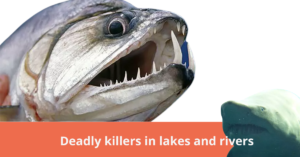 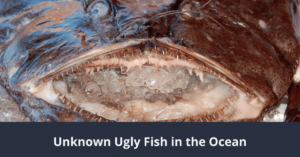