If you think of dangerous fish in open water, your first thought is likely to go to the ocean or vast seas. However, injuries and deaths from freshwater fish happen worldwide, from “monsters” of the Amazon River and Congo Basin to shark occurrences in the Mississippi River.

People have even died from giant catfish attacks in Europe.

Any form of natural water has the potential to be the home of a creature that poses a threat, whether it is a massive fish with ferocious teeth or a tiny parasitic variety that can make its way into, ahem, uncomfortable places on the body.

Here are the top ten most dangerous freshwater fish swimmers, boaters, and water recreation enthusiasts need to be aware of, in no particular order.

The Goliath Tigerfish looks like something out of a low-budget movie about monster fish in rivers. This fish lives in the rivers and lakes of the Congo Basin, where the native people refer to it as M’Benga (the dangerous fish).

This freshwater fish has a powerful jaw in frighteningly large, sharp teeth. The largest one caught on record weighed roughly 154 pounds on a fish scale and measured five feet in length.

The Goliath Tigerfish will eat the smaller of the crocodiles in the area and have attacked people on rare occasions. Watch yourself if you ever end up around water in the Congo Basin of Central Africa, and be wary of dangling limbs in the water.

Leave it to the Amazon to provide some of the scariest freshwater aquatic life. The electric eel seems a bit unreal if you think about it, but this fish—which is more closely related to a catfish than the moray eel—creates its own electricity to shock prey before attacking.

Humans may not be part of the electric eel’s diet, but they can produce 600-volt shocks if threatened.

What are 600 volts? Roughly five times more powerful than an American electrical outlet. That is enough to stun a human long enough to drown, and several shocks can cause cardiac arrest.

The arapaima (as called the pirarucu or paiche) is a genus of bonytongue fish. Why is it referred to as a bonytongue? Because this fish of the Amazon river has a type of teeth on its tongue.

This bonytongue feature isn’t the most notable, though. The arapaima is gigantic in the world of freshwater fish, growing up to nine feet long.

These fish also have armor-like scales, eat other fish, and sometimes even pick off a mammal near the water’s surface as a meal.

The goonch fish is also known as the Giant Devil catfish for a reason. This enormous freshwater fish lives in rivers of Indian and Southeast Asia. The goonch fish is a bit of a mysterious catfish that made a name for itself as a predator to humans.

Between 1998 and 2007, the goonch fish was deemed responsible for a series of fatal attacks on humans.

This giant catfish has pulled full-grown adults under and sometimes leaves no remains behind. The muddy color of the goonch camouflages them well into their environment, helping them with sneak attacks. Not only can they kill humans, but they also attack water buffalo.

Much like the goonch of India and Southeast Asia, the Wels catfish is a behemoth that can grow up to 16 feet long and weigh up to 660 pounds. A Wels catfish lives throughout southern, central, and Eastern Europe in lakes and slow-moving rivers.

Like the goonch, this giant catfish also has a mysterious history of attacks on people. Unlike some dangerous freshwater fish that might bite and then leave you alone, this huge catfish has taken people under. From examining remains, researchers determined that the fish eat humans when they attack, though attacks are relatively rare.
(You might be interested in reading about the other Marine Animals with the Strongest Bites)

The payara, or vampire fish, is another Amazon River predator. This fish is part of the dogfish tetra family and can grow up to four feet long.

While piranhas get a reputation for being the vicious, carnivorous fish of the Amazon, the payara is even more carnivorous, making piranhas into a meal.

This fish has two long fangs on its lower jaw that it uses to impale other fish. In large payaras, the bottom fangs are long enough to go entirely through a human hand or foot. You don’t want to be in the water with these toothy tetras around.

The giant freshwater stingray is estimated to be the world’s largest freshwater fish. These rays live in Indonesia, Malaysia, Thailand, and Cambodia and can grow up to 16.5 feet long.
(You can also read about the other Largest Freshwater Fish)

While stingrays are not typically aggressive toward humans, the barb on the end of their tail does pose a threat.

Especially in the case of this giant freshwater stingray, if a person is accidentally pierced with the barb, not only does it contain toxins, but the puncture alone is enough to cause severe injury and even death.

Most of the time, these stingrays stay at the bottom of rivers, but they can get caught in fishing nets. They have even pulled down small inflatable fishing boats when this happens.

The alligator gar is not an alligator at all, but rather, a type of Holostei with a torpedo-shaped body. This gar is one of the largest freshwater fish in North America and got their name because of their facial resemblance to alligators with their piercing teeth and broad snouts.

Typically, alligator gars are not threatening to humans, and will only snap if excessively provoked. The alligator gar is more of a threat to anglers if they catch one while fishing in that they can put up a ferocious fight, and are capable of biting when caught.

If you thought the ocean was the only place to fear sharks, it’s time to reconsider that belief. Bull sharks are not only listed as one of the most dangerous sharks in the ocean, but they add in another level of threat because they can survive in both salt and freshwater.

Bull sharks can adapt to brackish and freshwater to find food and can make their way long into rivers, and sometimes even connected lakes. In the Amazon, bull sharks have been found 2,500 miles inland.

The Candiru, also called cañero, vampire fish, or the toothpick fish proves not all dangerous fish need to be substantial in size. Again, the Amazon River offers up some of the most terrifying freshwater sea life. This small fish lives throughout the Amazon basin and is a parasite to other fish.

In the Amazon area, this fish is dreaded because of an abundance of hearsay accounts of the parasite swimming up into human genitals, either causing infection or, sometimes, requiring surgery.

In this case, some of the legends around Candiru seem to be exaggerated. However, there are a couple of examples, both old and more recent, of this blood-sucking fish swimming up a human urethra. Whether some of the stories are fact or fiction, we wouldn’t take our chances with this one.

Don’t make the mistake of thinking a river or lake is entirely safe from dangerous fish. While some of these creatures rarely harm humans, the occasional attack can be lethal.

Some of the problems with dangerous freshwater fish are that many rivers and lakes are murky with less visibility than tropical coastlines. Combine that with well-camouflaged fish that blend into a riverbed, and you could be wading into an area with one of these fish nearby.

As with any outing near or in the water, use common sense. Don’t go in the water if you’re cut or bleeding, and don’t provoke sea life. If the water has little to no visibility, it’s best to stay out of it unless absolutely necessary.

Finally, after researching these fish, if we could take a boat ride down the Amazon River, we would be happy to stay on the boat and never step foot in that mysterious river. Use caution wherever you are, though. It’s probably safe to say that people in Alton, Illinois, never expected a live bull shark to be in their local river. When you are on a hunting trip for the best fish to eat, always pay attention that you are not being eaten instead! 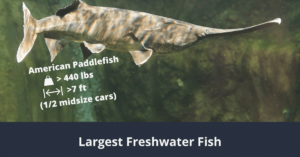 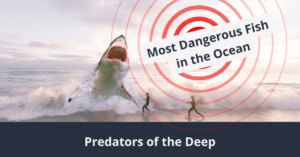 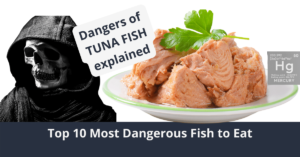