There aren’t many people out there who don’t enjoy a good cookout. From hot dogs and hamburgers to vegetables and corn, there are seemingly endless delicious foods to toss on a grill and cook over an open flame.

But if you’re looking for something a little more unique and possibly a little healthier to contribute to your next cookout, you should consider grilling up some fish. Some people worry that grilling fish is difficult or too messy to be worth it, but as long as you pick the right kind of fish from our list below and use a little care when grilling, you’ll end up with a delicious meal.

The Best Gills to Grill: Best Fish For Grilling

In theory, any type of fish would taste delicious when grilled. The main issue to avoid when grilling fish is having it fall apart and slip through to the interior of your grill. Because of this, there are certain types of fish that are better suited for grilling than others.

Thin, delicate fish, such as flounder, sole, or tilapia, aren’t ideal for grilling because they are likely to fall apart on the grill. Instead, opt for a firmer, thicker fish. If you’re concerned about a fish falling apart on the grill, you can wrap it in aluminum foil.

For extra advice, we took the liberty of listing the ten types of fish that are best for grilling due to their flavor, composition, and other factors. Let’s take a look at each of them individually.

Salmon is a versatile and very popular fish to eat, with its attractive pink color and unique flavor. You may have eaten salmon smoked, seared, or broiled, but it lends itself very well to grilling. Salmon is full of oils and healthy omega-3 fatty acids that keep the meat moist and tender while giving it a tasty outer crispiness from the grill.

Salmon can be a little more delicate than some other grilling fish. If you’re worried about it falling apart on your grill, you can wrap it in foil or, for a unique flavor twist, grill it on a cedar plank.

You can season your grilled salmon in many different ways, but it’s particularly delicious with lemon, paprika, or chili. Salmon also tastes great with various marinades or glazes.

You don’t need to worry about swordfish falling apart on the grill—it’s an extremely firm fish that can withstand the heat as well as any other meat. Swordfish is normally cut and sold as steaks, which are extremely convenient for grilling. Since it’s so thick, you can get some beautiful grill marks on them.

As you should with any fish, make sure to thoroughly clean your grill’s grates before you start, and let it heat up completely before you add your swordfish. To prepare your fish for the grill, use a paper towel to pat them dry on all sides before brushing on a generous layer of neutral oil (such as canola or olive oil). It doesn’t hurt to brush some oil onto the grill itself, either.

Swordfish has a mild, slightly sweet flavor and goes with just about any seasonings and side dishes. Many seafood aficionados like their swordfish grilled to the point of blackening.

Note that swordfish can be expensive and difficult to find. It’s also not recommended that you eat it extremely often since it has a high mercury content. However, grilled swordfish is a delicious treat for special occasions.

A thin-skinned Hawaiian fish that is also called a dolphinfish, mahi-mahi is a very versatile seafood. It has a flaky, tender texture but is still strong and meaty enough to stand up to the grill. However, it is easy to overcook it, so pay extra attention when grilling mahi-mahi.

Mahi-mahi has a delicate, sweet flavor that lends itself well to tropical flavors. Try serving it with mango or pineapple, or cut up the fillets and put them into fish tacos.

Mahi-mahi has the added benefit of being very sustainable, so you can feel extra good about enjoying its delicious flavor.

Red snapper is an American white fish with a recognizable red or pink skin. It has a mild flavor and a firm, meaty texture that lends itself excellently to grilling.

You can cook red snapper in fillets, but many seafood chefs prefer grilling it whole. Its skin prevents it from overcooking while giving it an attractive presentation. You can stuff the whole red snapper with lemon slices for an easy, impressive, and delicious meal.

There are also other varieties of snapper that are great for grilling, but the red snapper is the best known and tasty.

You’re probably used to eating tuna out of a can or in a noodle casserole, but grilled tuna steaks are a delectable summer meal. Tuna steaks, like cow steaks, are thick, hearty, and perfect for grilling. In fact, tuna is a popular fish for people who don’t normally care for eating fish since it has a thick texture and doesn’t smell overly “fishy.”

There are several different varieties of tuna, but yellowfin tuna is one of the most popular for grilling. Since it has such a distinct, strong flavor, you don’t need to worry about seasoning it too much—just add some lemon, dill, or wasabi.

Be careful not to overcook your tuna. Since it’s such a thick fish, overcooked tuna steaks will have an unpleasant rubbery texture.

Amberjack is a fish best known for sushi, but it has delicious grilling capabilities as well. It has a thick texture and mild flavor similar to swordfish, and you can get it in fillets or steaks. Yellowtail amberjack is an extremely juicy fish that doesn’t dry out easily, so it’s perfect for the grill.

Grilled yellowtail amberjack doesn’t need many fancy accompaniments—like other fish included in this article, it tastes just great with lemon, salt, and pepper.

Note that amberjack is a little harder to get your hands on than the other fish on this list since it’s mainly found in the Caribbean and Mediterranean. Give your local specialty grocery stores or fish markets a call and see when they have it available.

Yes, sardines are tiny little fish found in cans and on top of pizzas, but they’re also a delicacy on the grill. They have a tasty, salty flavor and make a great appetizer, entree, or snack. The best thing about grilling sardines is that there’s basically no preparation necessary—just pat them dry and toss them straight onto the grill.

Also known as blackfish, sea bass is a thick white fish with a flaky texture and a mild flavor. It’s an extremely versatile fish as far as culinary preferences go—you can blacken and barbecue it or grill it lightly and serve it with garlic butter.

Since sea bass is slightly flakier than other grilling fish such as swordfish and tuna, be careful not to let it fall through the grill. If you’re nervous about it being too flaky, you can always wrap it in foil.

Grouper is possibly one of the most versatile fish available for cooking. It’s a flaky white fish with a mild flavor and will taste great with just about anything. For a beachy summer night, serve grilled grouper with mango salsa.

Very similar to grouper, halibut is a delicious white fish with endless culinary possibilities. However, because it is lower in fat than other fish on this list, it can dry out quickly. Make sure to pay careful attention to your grill to avoid overcooking it.

Halibut is an excellent, slightly healthier alternative to chicken in many dishes.

Here are a few other types of fish that are great for grilling:

We also have some other related articles purely for fish eaters:

Fish is a healthy alternative to traditional cookout fare and is remarkably delicious and versatile. Don’t be afraid of putting your fish on the grill—just make sure to choose a meaty fish and to keep an eye on it while it’s cooking, and you’ll have a tasty meal within minutes.

Take this list with you the next time you go to the grocery store or market to ensure you get the best fish for your grilled dinner! 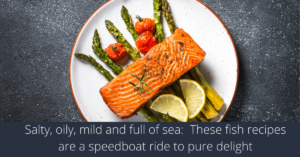 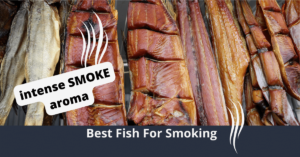 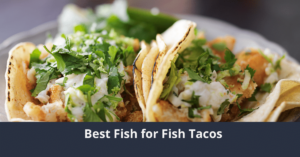 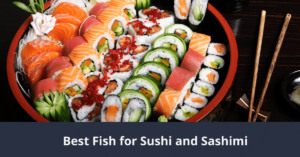 Best Fish for Sushi and Sashimi